On July 7, 2014 Governor Jerry Brown signed SB 1446 allowing businesses with fewer than 50 employees to continue offering group health plans that are not PPACA compliant through 2015. There are some details that you need to be familiar with.

These plans are tentatively known as “grandmothered” not “grandfathered since they are only allowed through 2015. Nice play on words.

Companies with “grandmothered” plans are exempt through 2015 for the following Federal and California provisions:

The end result is that premiums in 2015 should be lower non-compliant plans than for compliant plans. If your plan is more expensive to renew than a complain plan then you can simply switch to a compliant plan.

Well on this date your small group plan will need to be PPACA compliant and rates will be what they are. The expectation is that premiums will increase.

The landscape for health insurance is changing, whether its today on in 18 months, premiums are expected to rise.  Putting together an affordable benefits plan means that you may need to get creative to continue offering the level of benefits you currently offer while constraining costs.

One option that is gaining traction for businesses with as few as 25 employees is Self Funding.  The easiest way to differentiate between a traditional health plan and a self funding plan is to compare it to how you pay for cable TV (costs are fixed regardless of use like with a Traditional health plan) and your electric bill (costs are dependent upon utilization like a self-funded plan).

How Does a Self Funded Plan Work

Self Funded plans consist of two types of costs:  Fixed and Claims (whereas a Traditional health plan is made up of 100% Fixed costs).

In a traditional plan you pay a fixed monthly amount and claims are paid per the policy.  The cost for your next year of coverage is fixed, only changing if you add or remove employees.

In a self funded plan you pay your Fixed costs (which are lower than fixed costs of a traditional plan).  Plus depending upon your claims experience, you pay an additional amount to cover claims.  If claims are lower than expected you save money.  If claims are higher than expected you theoretically could pay more, but this is where having a stop-loss plan comes into play.

Your stop-loss plan is used to manage risk setting a max amount you would need to cover per employee and per aggregate policy.  You choose the amount of your stop-loss coverage based on your risk tolerance.

This graphic helps show the differences between a Traditional plan and a Self Funded plan.

One final advantage is that most Self Funded plans are exempt from most State Mandated benefits allowing you to offer the same coverage to employees across state lines. This allows for a more consistent and easier administration of your benefits. Wrap Up Health coverage related costs are likely to continue to increase once all plans are required to be PPACA compliant. Self-Funded plans are a long term strategy that helps your company contain costs and manage your benefits more consistently.

Have questions about Self Funded plans? Contact us at 310-414-9524, via email at info@johnrileyinsurance.com, or by completing our Fast Form below. 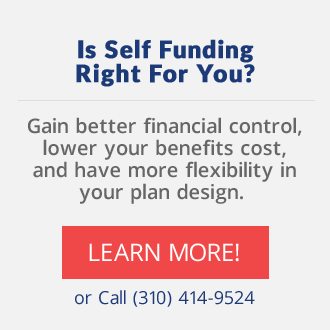 "John Riley and staff are extremely helpful. He has helped our company (beats by dre) grow in all insurance aspects with such smoothness. i would recommend him to anyone!"

"John has consistently provided great service to our small business and follows through on all open issues and has a very pleasant personality to work with."

"John is one of those quintessential professionals that are a rare find in today's community and business environment. His work in the non-profit community show his heart, priorities and integrity."

"After only a few minutes of conversation, John Riley was able to grasp exactly what I needed, and then with patience, carefully explain different options."

I just wanted to thank you and your firm for being such a solid reliable partner, not only with the insurance needs that you guys provide but also the ongoing support and willingness to always help out with some of the unconventional questions and requests. It's comforting to have someone like you on our side!